What does it mean to let one’s gaze play over the surface of an artwork? What is the distinction between physical touch and vision? Increasingly we are reminded that the eye and the hand are irrevocably intertwined—that seeing is a kind of touching. Maurice Merleau-Ponty, writing in the late 1960s, suggested that a viewer “who sees cannot possess the visible unless he is possessed by it, unless he is of it.”* The intertwining of all the senses—borne out by contemporary neuroscience—suggests that the initial visual experience of an artwork actually results in more expansive, bodily sensations. The artists in Touch Knows You Before Language** conjure visual encounters out of physical experience. Their works bear evidence of this intimacy, a hands-on investment; they beg for the eye’s inquisitive touch.

Erica Mahinay approaches her tactile process with conceptual and psychological verve. Often incorporating stretches of translucent fabric that show the skeleton of stretcher bars beneath, she conceives of her paintings as portals or windows. Finger holes interrupting the surface suggest a residue of the artist’s own hand, or compel the viewer herself to metaphorically penetrate the painting’s fraught liminal zone. Nude (In Free Fall) uses an enigmatic visual language to communicate an abstracted narrative—a figure plummeting in space. A second painting, Sensing on the Blind Path (Formation), bears almost desperate, vicious traces of hands and fingers across a muddy, semi-transparent scrim. Across her oeuvre, Mahinay builds tension by contrast: a muted palette crashing into violent gesture, or foreboding tones staining delicate, whisper-thin fabrics. Her deconstructions of the basic mechanics of a painting—its surface and support—arrive at a place that is both fragile and fierce.

Vivian Greven has said that she “gently stroke[s] bodies into existence,” an evocative way of describing a process that foregrounds care and tenderness. Her soft-toned, seemingly romantic paintings explore issues of closeness and trust—moments of physical empathy, lush and fleshy exchanges. Oil-on-MDF paintings of busts in this exhibition complicate familiar, classical imagery with jarring perforations that break the surface: references to the basic punctuation marks used to convey emotion via text message. (“I <3 you.”) These sly interventions suggest a chasm between the tactile presence of the body—welcoming an embrace, or a kiss—and the comparatively unintimate way in which modern feelings are actually expressed. Elsewhere, Greven’s focus on specific anatomy—ears, mouths, tongues—ask us to dwell on those zones of the body through which the sensorial bounty of the outside world is invited in.

Lauren Seiden achieves an epic grandeur through unexpected means; early bodies of work found her ceaselessly applying graphite to paper, using the tools of drawing to create objects with sculptural gravity. More recently, she has broadened her vocabulary to include marble, as well as a series of readymades—a way to more explicitly engage “the weight and history of contemporary issues,” she has said. Here, two
six-foot-tall expanses of pure marble are the foundation for material experiments that reference the body. Blank frames allude to both the frame of a picture or a mirror, and a woman’s own “frame,” with the veined quality of the marble suggesting a kind of skin. The marble’s cool, neutral elegance is offset by Seiden’s interventions. A tank top, completely covered by graphite marks, dangles off the side of one sculpture. The other is encased in plastic that is likewise obscured by a quasi-reflective sheen of graphite, a barrier or dressing for the marble secreted within.

*Maurice Merleau-Ponty, "The Intertwining - The Chiasm" in The Visible and the Invisible, 1968.

**The exhibition title is from Adrienne Rich's poem, "The Images," 1976-1978. "My hand half-sleeping reaches, finds / some part of you, touch knows you before language” 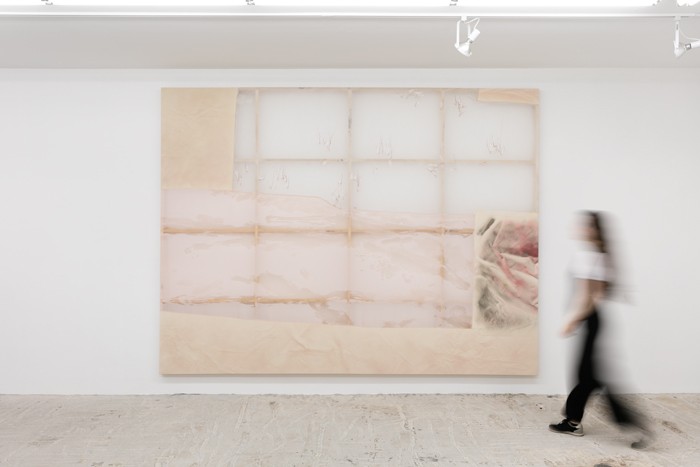